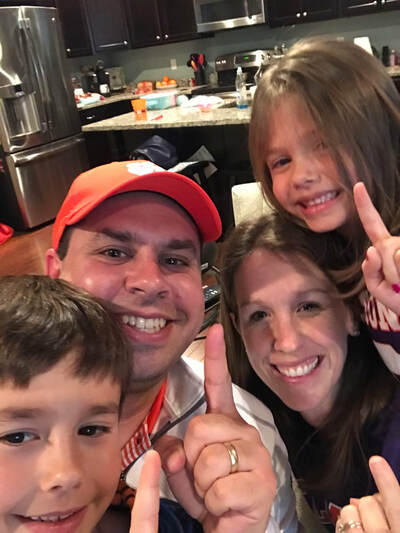 Steve with his wife, Julie and their children, Coleman and Finley celebrating Clemson's most recent National Championship win.
Originally from New Orleans, LA, Steve lived across the southeast before settling in Columbia, SC. After growing up on the fringes of the Roman Catholic Church Steve found a home in the United Methodist Church while attending Dutch Fork High School. His first day in the UMC was on World Communion Sunday. He still remembers the powerful expression of grace he experienced when he was invited to the Table for the first time. As he left to become a student at Clemson University in the fall of 2000, Steve began wrestling with a call to ordained ministry.

Steve spent most of his time at Clemson traveling with the Ultimate Frisbee Club Team, attending athletic events, and actively participating in Clemson Wesley. He studied to be a math teacher and had plans to be a teacher with his wife, Julie, until he went on a mission trip to Eleuthera, Bahamas for spring break his senior year. It was on this trip that Steve felt a strong call to fulltime ministry.

Still, discerning his call to ministry, Steve came on board as the Assistant Campus Minister for Clemson Wesley for two years after graduation. After a few more years in youth ministry, Steve discerned that God was calling him into ordained ministry. In the fall of 2008 Steve and Julie moved to Atlanta, GA, to attend seminary at Emory’s Candler School of Theology.

After serving Bethany UMC in Summerville, SC for two years Steve was ordained and appointed as the Campus Minister for the United Methodist Church at Clemson University and the surrounding area in July of 2013. He has a passion for students and helping them recognize that we are all invited to receive God’s grace.

Steve and his wife Julie have two children, Coleman (son) and Finley (daughter). The Simoneaux family enjoys opening their home to students and sharing in the lives of college students.
CONTACT STEVE
CLEMSON WESLEY | A CAMPUS MINISTRY OF THE UNITED METHODIST CHURCH
FOLLOW US ON FACEBOOK AND INSTAGRAM: @CLEMSONWESLEY